HelpServer's workflow mechanism can send task related notification messages to contributors of the workflow. However, people can also generate a task list. The task list is an indispensable tool to tell people exactly what tasks they have to perform in which part of the project. It is a complete overview of their completed tasks and their pending tasks.

In the next example, we assume the person with the user ID "MICK" is the performer of the "Edit" task in the workflow.

To proceed with this example, restart the workflow in the "ADMINISTRATOR" workbench session. Next, start a new workbench session using the "MICK" user ID and follow these steps to generate a task list. Pop up the menu of the folder in the tree and select "Workflow>Generate task list". Or click on the "Tasks" tab in the bottom pane of the Workbench and click the "Generate" button on the far right of that pane.

If you do not see the "Tasks" tab, select the menu item "Window>Show view>Tasks" in the main menu of the Workbench window.

The "Generate task list" window will open. Click "Start" to scan the entire folder. When this operation is finished, close the window.

The task list is shown in the "Tasks" pane at the bottom of the Workbench. The "Tasks" pane is split into two vertical panes. The left pane is a small tree of objects that shows the tasks that are currently assigned to you. You can see which of your tasks are pending or completed. Additional tree nodes will appear if tasks can be skipped or rejected and if multiple tasks are assigned to you.

The "Edit" task under "Completed" has no icon. This means that there are no data objects for which you have already completed this task.

If you double click a data object in the list on the right, it will be preselected in the tree and you can start performing the task.

In the next example, we have completed the "Edit" task of the "Birds" chapter in the "Encyclopedia: Encarta" project. 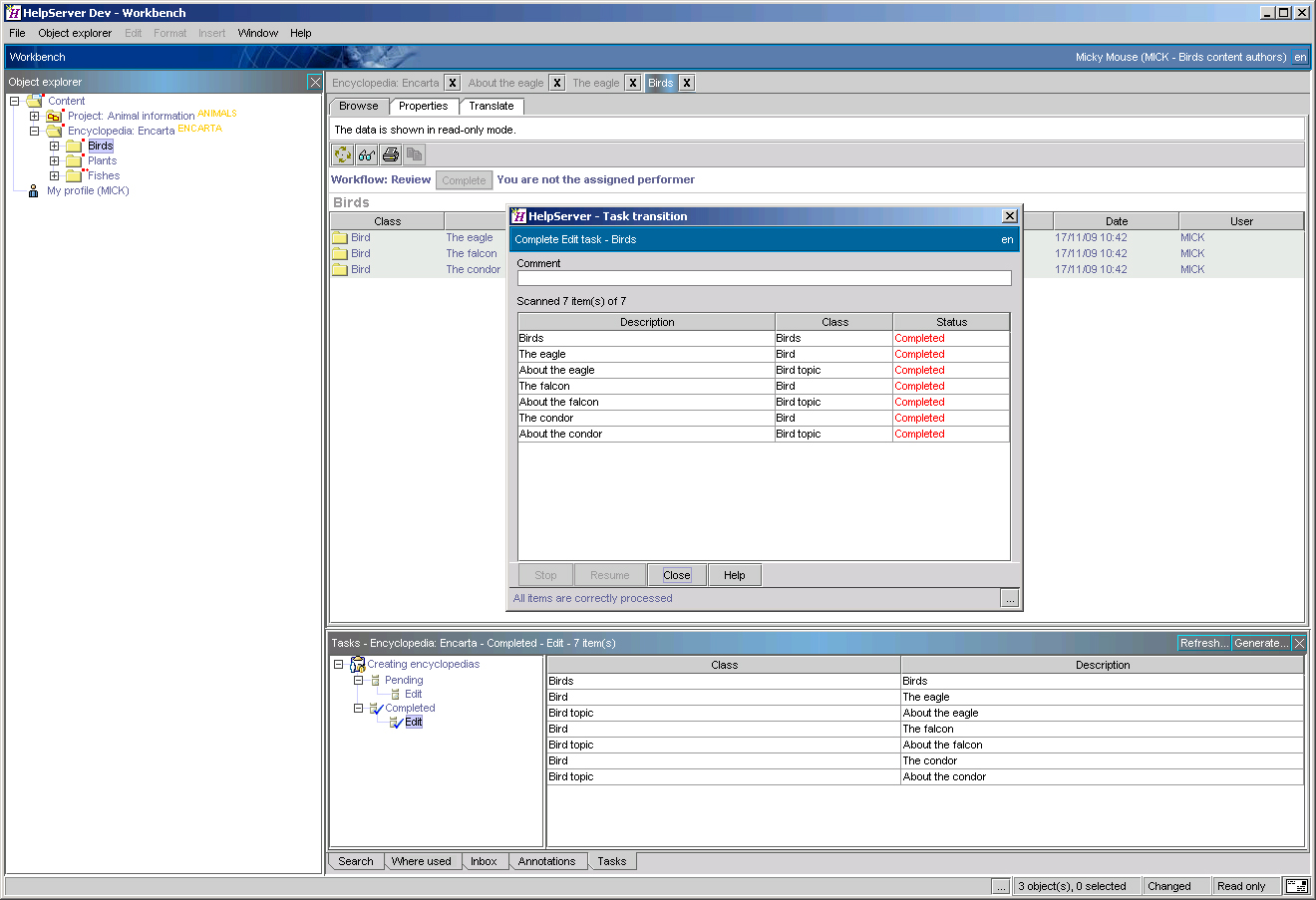 The task list is automatically adjusted after each task transition you perform in the workbench session. In this example, data objects are moved from the "Pending>Edit" node to the "Completed>Edit" node.

Should you reject tasks, the associated data objects will then appear under both the "Rejected" node and the "Pending" node (not shown in the above image) of the "Task to return to when this task is rejected"

Keep in mind that the task list is not saved. So you will have to regenerate a new task list

After these operations, a message box will remind you to refresh the task list. In the previous example, a task list was generated for the entire project. In large projects, a huge number of associated data objects will be listed in the right pane of the "Tasks" tab. Should this bother you, consider generating task sublists for one or more subfolders of the project. In the next example, we will demonstrate how to generate a task sublist for the dependent "Fishes" subfolder. 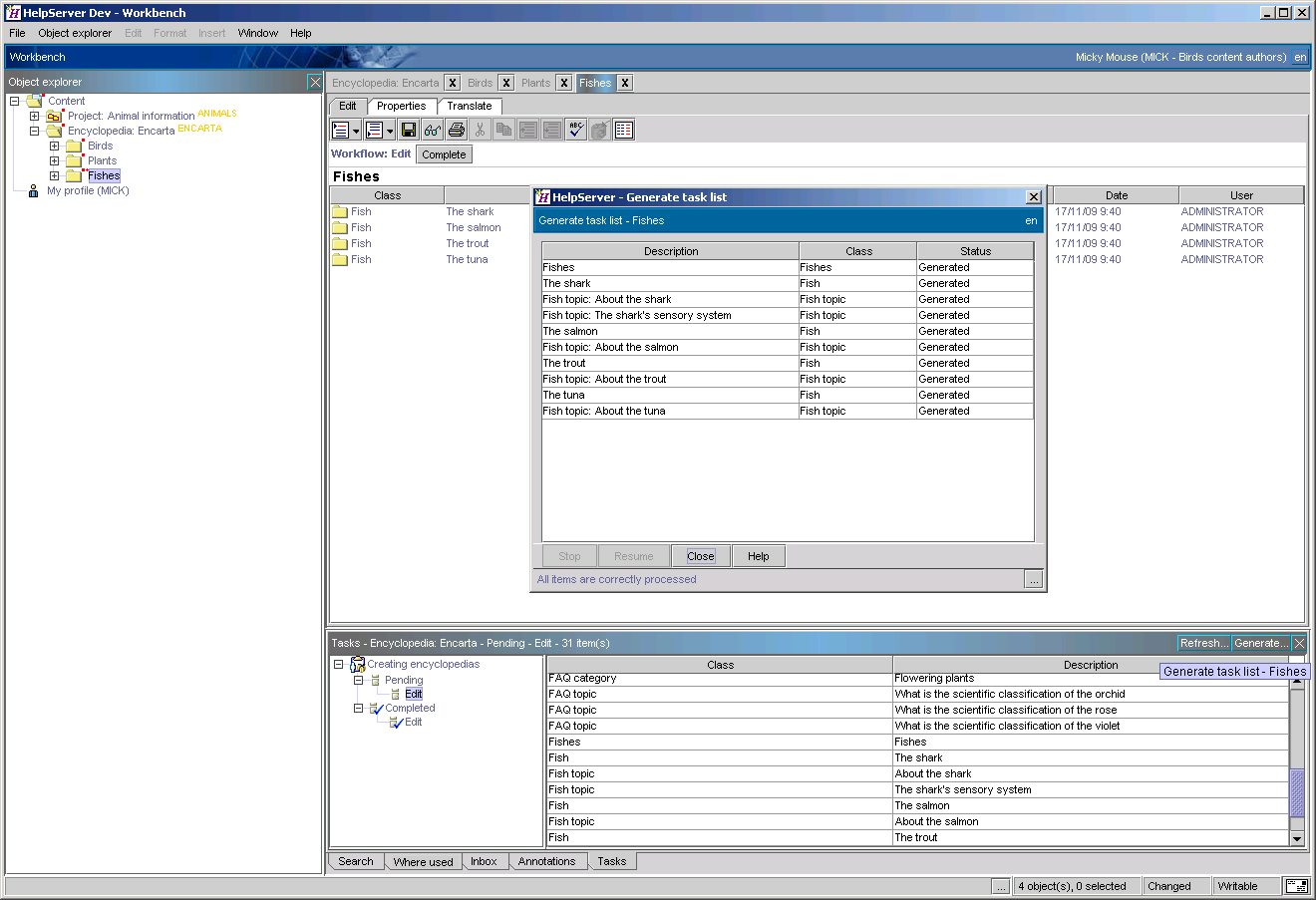 Select the subfolder "Fishes" in the main Workbench tree on the left and click on the "Generate" button on the far right of the "Tasks" top bar. The tool tip of this button indicates that you are about to generate a task list for the "Fishes" folder. Should you click the "Refresh" button than the task list of the entire project will be generated.

The "Generate task list" window will open. If you click "Start", only the "Fishes" folder will be scanned.

When this is finished and the window is closed the "Fishes" subfolder will have its own task list showing only the associated "Fishes" data objects and nothing else. The main project folder "Encyclopedia: Encarta" and all the other dependants still share one and the same task list. The "Fishes" data objects will not appear in that list.